November’s birthstone is Citrine or Topaz.  The name “citrine” comes from an old French word, “citrin” meaning lemon.    “Topaz” comes from Sanskrit meaning “fire.”  Both are unusual and beautiful stones, exuding warmth, creativity and brightness.  The two stones are so alike that they are often mistaken for each other, as well as, sharing many of the same properties.

During the Middle Ages, topaz was believed to heal both physical and mental disorders and prevent death.  The Greeks believed topaz would increase physical strength and make its wearer invisible while the Romans believed it to improve vision.  The Egyptians wore it as a good luck charm to protect them from injury.  Some also wore topaz to protect them from snake venom and other poisons, believing that topaz changed color if it was near poisoned food or drink

Modern day properties for Topaz, along the same lines, are strength, releasing tension and balancing emotions.  Topaz is also used to enhance spiritual connections and feelings of happiness.   It is said to dispense worries and lighten the hearts of the wearer, even brightening the day of anyone who sees it.  Topaz was one of the 12 stones said to have been set into the Breastplate of Aaron, representing the tribe of Simeon.

Citrine, similar in properties and physical structure, was believed to be droplets of sunlight fallen to Earth and considered sacred to the god, Ra, in ancient Greece. The Romans, also, believed the brilliant yellow stones were sacred to their sun god, Jupiter.

Citrine offers its wearers the properties of clear vision and truth. It stimulates clarity of thought, inspires generosity, strength, and inner confidence.  Wearers of the “sunshine stone”  are believed to be endowed with every earthly pleasure because the citrine also brings the favor of the gods in nearly every ancient custom.

Energized by the sun, the topaz is the perfect stone to light a spark to the short, dreary days of November.  So, if the sparkle of sun warms you and inspires your creativity, why not wear either of these gemstones to warm, comfort and inspire you this month? 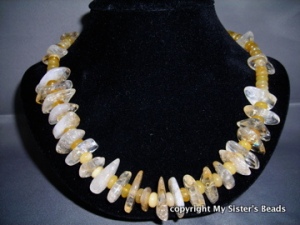