For centuries, people have worn jewelry as religious symbols, to help them feel closer to God and to reaffirm their faith. Although, different religions have their own ornamental symbols, Christians often wear small crosses as pendants. The Ancient Egyptians, often adorned a special talisman, the Ankh which is a loop above a cross, representing eternal life and happiness. The Hebrew Star of David, which is a six-sided star, is believed to bring good fortune and luck to all who wear it among the Jewish community. Buddhists wear pendants in the shape of Buddha. In today’s superstitious culture, religious symbols of all types, have merged into the fashion world.
My true passion is for the gemstones and in preparing for this Christmas season, I’ve found some favorite gemstones, that carry with them a history and lore bearing the same traditional ideals we associate with the holiday season.

Amethyst, a stone of spirituality, peace and contentment.
Moonstone, a stone of hopes and wishes.
Garnet, a stone of purity, truth, faithfulness and friendship
Lapis Lazuli is a stone of protection and enlightenment .
Blue Lace Agate evokes peace and gentleness and enhances spiritual inspiration.
Carnelian stimulates the energy of love and joy. 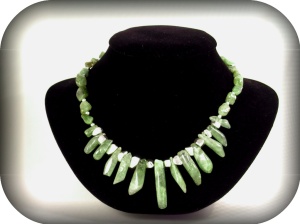 Garnet’s name comes from granatum, Latin for pomegranate.  The red garnet is probably the most popular and most familiar color of garnets.  My new favorite gemstone are the garnets that are a luscious, earthy shade of green,  as well as, a broad range of yellow and orange earthy tones.   Though available in a wide range of colors, garnets are also identified by many names such as grossularite, hessonite, pyrope, rhodolite, tsavorite, spessartine, demantoid, and uvarovite.

One of the most impressive stories that I discovered about the history of garnets is Noah’s use of the garnet as a lantern.   According to some legends, Noah is believed to have used a garnet lantern as a guide in his path & for giving light inside the ark. Early Egyptians were well known for their use of garnets in their bangles, bracelets, rings and scarabs.  The ancient Chinese were said to have used garnets as bullets but the garnet’s  real beauty and value was most pronounced during the Victorian period when the trend was Bohemian garnet jewelry, known for it’s encrusted close-set stones which were often rose cut and sometimes combined with larger cabochons and faceted stones. Even in early days the garnet was considered a protective stone and believed to protect its bearer from evil and disaster.

After a recent trip to New Orleans, where I purchased some gorgeous green garnets, I have totally fallen in love this this gemstone.  It is perfect for fall, winter, summer and spring  with it’s variations of tones and earthy color.